Metro have reported that the Scottish SPCA were called out to deal with a cow that had got it’s head stuck in a ladder. The inspector was called out to deal with the situation in Ayrshire, West Scotland and told the BBC ‘I arrived at the field to find the cow looking confused but surprisingly calm despite having his head wedged tightly between the rungs of the ladder.’  With some help from the farmers family to keep the rest of the herd away, he was able to gently release the cow’s head. 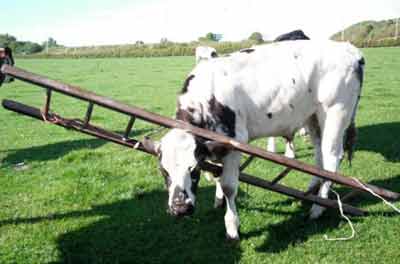 ‘The farmer had no idea how the ladder ended up in his field as he only recently took on the lease for the land. It may have been used to patch up a hole in the fence or it could have fallen off a passing van or lorry. Either way, it’s a rescue I won’t forget in a while.’

Be prepared for guests this August Bank Holiday