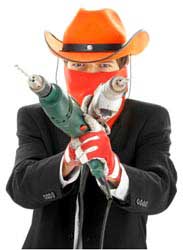 This series of 5 blog posts explores the rise in numbers of rogue tradesmen in the UK.  The research was carried out by DIY Doctor Ltd courtesy of the British Library in December 2011.

Rogue Traders of all kinds have been around since time immemorial and will never go away completely but it is DIY Doctor’s intention to bring the portion of this problem which is attributable to the Building Industry to the attention of as many people as possible so that we may be able to introduce a level of transparency and integrity into our industry.

How it all started

The home improvement boom started in late 2007 when internet research company Hitwise, concluded that DIY and home improvement activity was increasing. There was a 25% increase in internet searches for the top ten DIY related “How To” queries in the 12 months to September 2008.

The company said it looked as if people were starting to improve their existing houses rather than move. The interesting thing about the growth in home and garden retailers is that it applies both to DIY retailers, such as B&Q, Screwfix and Homebase, and furniture retailers such as IKEA, Laura Ashley and Wilkinson Plus. Both types of retailer had increased their share of internet visits significantly over the last 12 months.

This coincided with a survey by Nationwide that the average price of a UK home was 16.6% lower in September 2009 than it was at the start of 2008.

According to various polls and research by building societies and insurance companies this trend has continued over the last 2 years and, in information released by Survey of English Housing, Communities and Local Government, a staggering 56% of all mortgage owner equity released from properties in England is spent on home improvement and renovations.

However, according to a survey by Confused.com in July 2008, 6 million adults (10% of the population!) admitted to having a disaster of some kind in the home with DIY mistakes, with 10% of those responding admitting the mistake was so bad they had tried to claim off their home insurance.

You can find out more about avoiding cowboy builders by using our Home Improver Protection Solution.

Please post your comments to help us provide the best support we can for home improvers.

Card charges to be banned