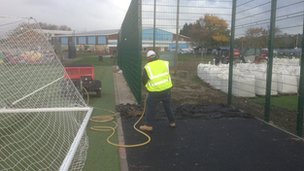 Now we hear a lot about cowboys in the building game and we are the first to condemn bad workmen, but what about when the builder is doing his bit but the customer isn’t paying?

Ron Downs of Unidig in Essex has had enough after being owed £12,000 by a contractor who has gone into liquidation and so he has returned to the site to reclaim his materials.

Castle Point Borough Council owns the land and they hired construction group Morgan Sindall to oversee the building of Waterside Farm Leisure Centre, Canvey Island, a development worth some £4 million.

A P Thompson was recruited as a sub-contractor who then employed Unidig to refurbish an all-weather pitch. Ron says “We did the excavation work, dismantled the fencing around the outside, introduced new kerb stones and new tarmac – we were there for three weeks.”

We hope Roy manages to recoup his losses and continue to trade.

We are committed to helping the general public avoid unscrupulous builders and we have lots of advice on how to avoid the cowboy builder including a free building contract.