Damp at base of wall, DPC above internal floor level 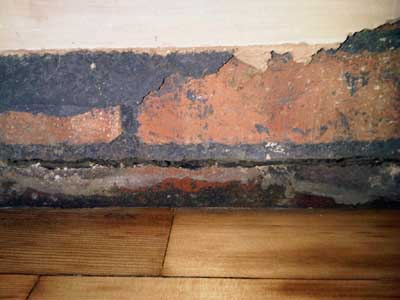 What can I do about this? There appears to be similar symptoms along the external edges of this floor, and also in the two bays at the front of the house (salt and rotting skirting - not fully investigated that yet).

dormermike,
Take up the laminate, lay a dpm and lap this up the walls, refit laminate and pin dpm to walls with skirting.
end

take up laminate from edges of the walls and paint bitumen on the floor and up the wall behind the skirting,also paint the back of the skirting with it to stop it rotting.

Thanks for the replies!

Thats not laminate, its a block floor, sitting on a bitumen layer on top of a slab which dates back to the original build circa 1920's. I have found far worse damp in the front rooms of the house (that pic above is an internal wall) and i think it may be to do with the block drive being right up against the brick work of the house, combined with the dpm being installed incorrectly above the internal floor level.

Does it stand to reason that if I lower the outside ground level around the house it will help reduce the damp inside the house? I am thinking of removing a row of bricks from the block driveway closest to the house walls, digging down a few inches, then installing a gravel or similar drainage solution.

I also have a leaking roof, which *may* be contributing to these internal problems (was pouring in recently).

There is no way i'm lifting the floor btw (i just sanded it :D )

Behind the skirtings in each of these rooms, was a LOT of loose damp/moist material. I took about 5-6lb out from behind one bay skirting alone. Now that i've cleared it all out to the concrete floor slab and wall, the damp patch is receding.

Does anyone know what this material could be? It was kind of like soil and mortar, and tightly packed in behind the skirting. I suspect it has been there since the house was extended in 1994. There was not enough rotten wood and mortar missing from the brickwork / back of skirtings to account for this large amount of material, and also, it was tightly packed in. It is around all edges of the floor slab in all the old rooms.

dormermike,
With the type of floor construction you are describing I suspect the bitumen layer which the wood blocks are set in was once taken up the wall. You need to reform the vertical element of the DPM and suggest you try coating the wall below DPC with water based bitumen, mask the wood floor with wide masking tape so you can work the paint down behind the edge of the wood. It will need 3 or 4 coats.
end

Stoneyboy many thanks, I did wonder about that.

I have noticed the exterior pointing is awful with massive gaps so wont be helping.. i'll get that sorted, plus im getting a damp "expert" in to see what they say. I'll then consider painting bitumen up to the DPC as you suggest..

Any ideas what the loose earth was? Where i've taken it away, the damp is improving slightly.

dormermike,
"Any ideas what the loose earth was" - probably lime based plaster.
end

Just a quick reply. Firstly you must redo the pointing that always causes damp problems. I would not use bitumin it has never worked for me on heavy damp. I would use either epoxy dpm which we use under wood floors or damp proof slurry which is a cement based damp proof membrane (it is also cheaper) and I have stopped running water (when it rained) and damp with it, in a cellar. If you require a new wood floor we sell them. Visit our http://www.livinghouse.co.uk.
Last edited by gilo on Mon Oct 18, 2010 3:40 pm, edited 3 times in total.

Due to slightly conflicting views i've asked for damp experts to come and do a survey.

OK for anyone interested, I had a damp company come along and give advice, and also a very trusted builder. I appreciate its easier to give advice when the problem is right in front of you, and hopefully this thread helps someone someday which after all is the point of forums.

The builder said that lifting the blocks and resealing with bitumen upto the original 1920's DPC (which was also bitumastic) would be sufficient, but really, the "proper" way to do it would be lift the floor to about 6-8 inches depth and lay a damp proof membrane - cost about £1000 per room.

The damp proof person came in, and TBH I was expecting the hard sell - but actually was surprised. He said the floor was designed to work exactly as it was working, and yes there is damp but its actually contained beneath the DPC and does not extend past the 2 inch gap onto the blocks. The material I removed was saturated, which was wicking the damp up and rotting the skirtings and the blocks. This is the problem, and has now been cleared. The presence of damp at the base of the wall is not in itself a problem, and if the building work in 1994 had not caused the material to build up behind the skirtings we would probably have not even known about the 1-2 inch of damp at the edge. He said to lift the outer blocks and reseat them onto a fresh coat of bitumen, and run the bitumen upto the original DPC if needed. This would not stop damp in the gap between the floor and wall, but would help protect the blocks.

He also looked at the pointing on the front bays and said to sort that out as driving rain will soak the bays and get in through the gaps in pointing.

Curiously, even though its rained lightly, but not enought to go near the bays, there is fresh damp staining coming down the outside brick work aparently coming from within the cavity itself. He couldnt answer that directly, but recommended getting the cavities inspected and cleared as necessary.

Fair play, all in all very happy and will do as directed.

Thanks forum people and in particular welshboy and stoneybrickey :D

dormermike,
Thanks for the feedback.
If the blocks on the outer are not loose you will create more problems by re-setting them - they will be stuck into hot bitumen.
Using hot bitumen up the wall as suggested by the damp proof person will be almost impossible, this is why I suggested you use a water based bitumen paint.
With the age of your home it is unlikely that you have cavities - there may be a gap in places between the inner and outer bricks but this may well be filled with lime mortar.
end

Sorry, I didn't see your reply.

I have been progressing with this... I didn't use hot bitumen i am using a roofing felt adhesive. Not sure if it is water based but it is going on well. Curiously where i've painted it, the the damp has improved no end on the unpainted parts. I think your point about the cavities being bridged in local places is correct, and the damp perhaps penetrating laterally along the base of the wall.

Hi,
Just reading the history on your damp problem and I suggest you never try to seal away a damp patch, it really won't work. the only sustainable method is to allow it to breathe, which it sounds like you have done by removing the loose material. Give it a chance to dry first. reducing ground levels outside is a good idea. Injection DPC has never lasted don't do it, be more pathalogical; find the true cause.

j.orsi wrote:Hi,
Just reading the history on your damp problem and I suggest you never try to seal away a damp patch, it really won't work. the only sustainable method is to allow it to breathe, which it sounds like you have done by removing the loose material. Give it a chance to dry first. reducing ground levels outside is a good idea. Injection DPC has never lasted don't do it, be more pathalogical; find the true cause.

Thanks - bit late now though. I have had conflicting views throughout tbh, and the bitumen was the original dpm underneath the blocks, which if you think about it, was "sealing away" the damp was it not.... fingers crossed anyway, its done now.