Can anyone help me with the below, the photo in the loft show wet timber marks that are directly above the bathroom area of the house. The bathroom does not have a suitable extractor fan as yet and I was wondering if the wet marks are a result of constant steam and damp raising up into the loft area. The roof was totally re newed, ie lats/felt 3 years ago and still under warranty, I aked to roofer to have a look at this for me and his is adamant that this problem is not related to any of his roofing work.

The second and third pictures show the chimney breast in the bedroom directly below the capped chimney pictue as shown in the roof space in the loft photo. This wall has water running out of the bricks and gets worse during humid conditions, and I thinks its due to chimney salts being present. I know I will either have to hack the defect plaster off or remove the unused chimney breast in the bedroom, however, I was also wondering if the damp problem in the loft is somehow "feeding" this damp problem in hte chimney breast. The timber in the first photo does actually touch this chimney breast from instead the airing cupboard and I was wondering if this wet timber is causing the water to run and bead down the bedroom chimney breast? Any advice would be very helpful.
Thanks 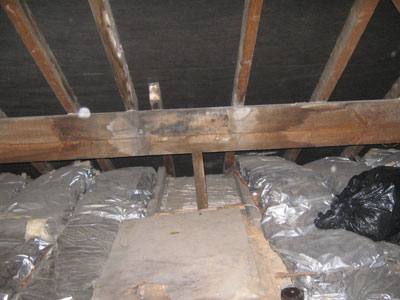 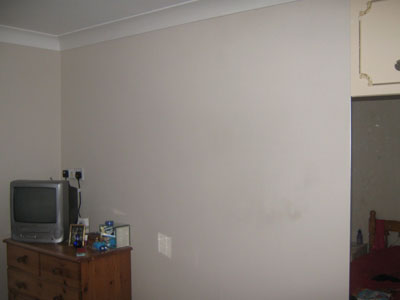 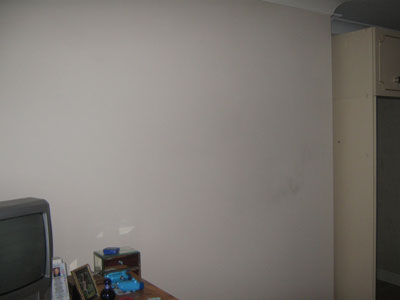 Have you wrapped the insulation in plastic??
If so it could be the cause of condensation,Remove it.The chimney breast needs an airbrick fitted to allow air circulation that should stop it also the insulation should be free from the edges to allow airflow in the loft

Many thanks for the reply, yes the insulation is covered in one side "foil" and one side in orange type plastic with air holes in it. It was purchased from B and Q , should I remove it?. Also when you mention an air brick in the chimney breast, should this be in the bedroom and downstairs room? . The old chimney has been removed and brought down level with the loft. It has not been sealed and the holes remain open in the left space (as seen under the piece of wood in the first photo)" has been brought down and left open in the loft space, would the loft aslo have to be vented to allow air into the old chimney breast?

It would appear from the first picture that you may have a condensation problem in the roof space, these problems may not have been there before the new felt was fitted as this would have sealed up any gaps in the roof that had been letting in fresh air.

You now need to get ventilation back into this space at high and low level i.e soffit and ridge level.

Pull wool insulation back at soffit to leave at least 50mm. You are also advised to cross layer insulation over the timbers at ceiling - this will limit heat loss from the areas below, insulation in loft spaces now should be at least 270mm thick.

The wall in the bedroom needs to be vented if there is a chimney flue behind it, stale air no where to go, would be advisable to fit vent in chimney also this will allow air movement to outside.

In the bathroom the lack of a fan will not create condensation in your loft, your bathroom ceiling would be in a terrible condition if that were the case, but this is very unlikely to be the cause.

Advisable to have a mechanical extractor to remove moist air and ensure that window is fitted with a trickle vent to bring in natural air independent of the fan and also need heat, this system should control condensation problem.

Any condensation marks can be rubbed off, looks like soot, maybe need to apply some mildew remover to clean things up.

Many thanks for you reply- had another look up the loft today and the damp seems to be getting worse with more white mildew type spores appearing on the large timbers. I moved the insulation away from the edge of the roof area (the roofers put this down for me so wasnt really sure how close to the edge they put it). Noticied on some small areas where the felt was toching the insulation in the corners that it was acutally wet. I have taken a few more photos showing the airing cupboard directly below the wet timber area (as shown in the first photo) and it shows very damp plaster and wet wall paper (whats left of it), I also noted that is was very wet in the top corners of the airing cupboard. These airing cupboard photos were taken half and our after the bath was used.

I spoke to the roofer ref the roof venting scenario and he stated it may fix the problem ,and 6 roof vents may be required (2 on each side of roof) . Does this sound like the same method you mentioned, ie sofit level and ridge level?.

One final note, you mention adding more insulation, ie another 270mm layed accross my current 200mm in the joists, this would total 470mm, would this cause any breathing ciruclation probs? or would more insulation be required if roof vents were fitted?, ie does it make the loft colder. I also have my boiler in the loft? does this matter.

Many Thanks for the help
[img][img]https://www.diydoctor.org.uk/i/forum/loft1.jpg[/img] 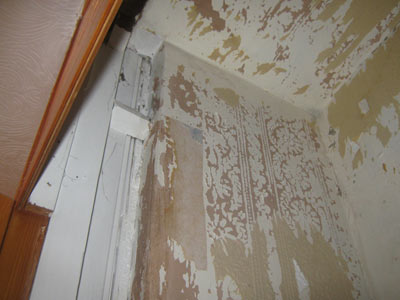 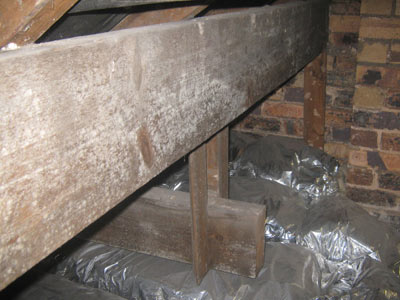 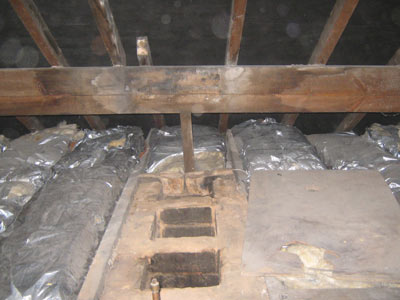 With condensation when it appears usually it can be rubbed off with a damp cloth rather than what a wet mark from a leak would give.

The British standards for roof ventilation is dependent on pitch of roof, but generally low level vents should give equivalent of 10,000mm squared free air per metre and 5,000mm squared at high level, they should be fitted back and front elevations of the roof.

Check how much free air each vent being proposed by the roofer actually provides.

With the insulation if you have already got 200mm, I would suggest cross layering with an additional 100mm, this is to limit heat loss from warm downstairs escaping between timbers in very cold attic and reducing the chance of condensation occuring, like putting hot kettle to outside cold window - condensation.

If condensation allowed to form it will appear as droplets on the cold surface and fall back into attic, making it look like you have a leak.

It may however, also be worth checking that you do not have a roof leak anyway.

The chimney - should be vented where fire place once was, the flue when in operation was vented from fireplace up chimney and out to air, this has been blocked and old stale air has no where to go, so vent where fireplaces were.

Many thanks for your help, its very difficult to decide if its condensation or leaking roof, I have a 20 yr warranty on the roof and brought the roofer out to see it but he is adamant the roof isnt leaking, I am tempted to bring another roofer in for a second opinion. Thanks for the advice on venting the old fire place area (down stairs) is now blocked off but we could put a vent in with no real probs. I suppose the only way to tell for sure about the wet problem is wait for summer? then at least if it rains during the warm weather and the timber is wet then its leaking in. I cant actually remember seeing this last year summer, but may be I thought it was just the old mark from the chimney stack. Do you happen to know any national damp companies that could help me with this problem?.

The thing thats making it very difficult to identfiy whats causing it is when the baths used and the aircupboard (as shown in the photos) get very wet in the top space directly below the wet timer photo?, so is it raising damp wetting the timber? or leaky roof soaking from above.

Thanks for the help, I think I am going to be struggling with this one for a while!

After checking the pictures, the new felt looks to be in good order, therefore is is unlikely that the roof is leaking, still believe the probelm to be condensation. Roof will need plenty of ventilation high and low level to solve this problem, just check all the new houese being built all have plenty high and low level roof ventilation.

Make sure that you pool the insulation back from where it could touch the felt, insulation will get very wet.

The cupboard issue in the bathroom, I can assume that the moisure from bathroom will rise up towards the loft space/chimnet above possibly escaping through any gaps in insulation and condensing when meeting cold air in loft and dripping back down into cupboard.

I wou ld try opening window when bathing and make sure that insulation in loft above this area is fitted between timbers and cross layred over timbers to limit heat/moisture escaping and coming into contact with cold air in attic.

You may also have to consider fitting a dehumidistat mechcanical extractor which will come on when the moisture in the bathroom gets to a certain level, with condendation generally 3 things needed - heat, extraction and fresh air - take one out and condensation can occur.

I can also say that this is not rising damp, it is either condensation or penetrating damp.

Many Thanks for your help, I will go with the advice and ensure the roof space is vented and further insulation is placed across the existing insulation and also place some over the old open chimney in the loft space. I will also ensure extractor fans are placed in the bathroom and also get one fitted in the kitchen. The roofer is adamant that its not a leaky roof and also thinks its damp or condensation. I will let you know how I go on.