I am replacing an electric shower. The old one was connected to the mains-pressure cold water supply by a soldered double elbow and tap-connector which was enclosed within the front cover. The double elbow provided space for an earth-bond clamp with a wire to the Earth connection of the electrics.

The new electric shower has limited space and has a plastic pipe for a compression fitting, so I unsoldered the old double elbow. This leaves an inch of copper pipe sticking out of a hole in the wall. I fitted a compression elbow. This does not leave any room for an earth bond clamp.

The 15mm copper pipe rises up through a stud wall into the loft through a 25mm hole in the wood where it rises a foot and then joins an isolation valve. There is room there for an earth clamp but running a bonding wire back would probably be impossible without breaking a hole in the plasterboard on the other side of the stud wall. 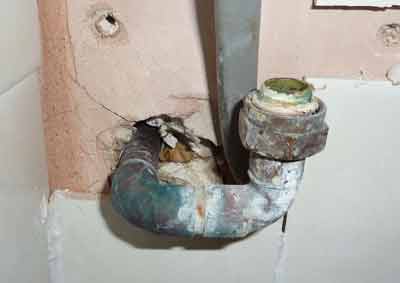 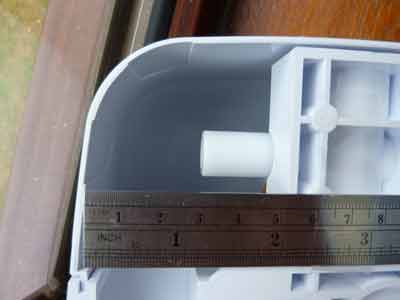 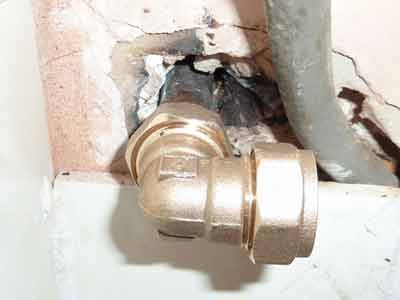 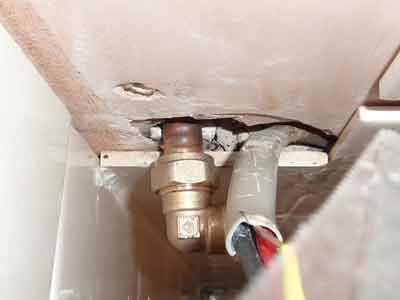 The whole question of bonding in a bathroom depends on which edition your bathroom has been wired to as with 17th Edition all electrical items in the bathroom (including the lights) need RCD protection. And if the room complies with this then bonding is not required. See below.

Class I and Class II equipment to the accessible extraneous-conductive-Parts, within a room containing a bath or shower, including the following:
(i) metallic pipes supplying services and metallic waste pipes (e.g. water. gas)
(ii) metallic central heating pipes and air conditioning systems
(iii) accessible metallic structural parts of the building (metallic door architraves. window frames and similar parts are not considered to be extraneous-conductive-parts unless they are connected to metallic structural parts of the building).
Supplementary equipotential bonding may be installed outside or inside rooms containing a bath or shower, preferably close to the point of entry of extraneous-conductive-parts into such rooms.

Note 411.3.1.2 Protective equipotential bonding
In each installation main protective bonding conductors complying with Chapter 54 shall connect to the main
earthing terminal extraneous-conductive-parts including the following:
(i) Water installation pipes
(ii) Gas installation pipes
(iii) Other installation pipework and ducting
(iv) Central heating and air conditioning systems
(v) Exposed metallic structural parts of the building.
Connection of a lightning protection system to the protective equipotential bonding shall be made in accordance
with BS EN 62305.
Where an installation serves more than one building the above requirement shall be applied to each building.
To comply with the requirements of these Regulations it is also necessary to apply equipotential bonding to any metallic
sheath of a telecommunication cable. However, the consent of the owner or operator of the cable shall be obtained.

Since we don't know how your house is wired we can't give an answer as to what you need to do. Since it is not a like for like replacement you will need to inform the LABC and pay their fees. They in turn are responsible for safety and should instruct you as to what they will permit. However I would not want to rely on their expertise when they have looked at some of my work they seemed to have no or little electrical knowledge. But likely if I had not been qualified they would have used outside help.

In real terms it would be likely cheaper not to DIY and to use a registered electrician who can self certify the work.