Leak in the Kitchen from upstairs Bath

Hi, Never had this exact problem before but have never been able to run the dishwasher and washing machine at the same time so assume it could be related to the way its setup.

The bath is now flooding the kitchen when draining it. The kitchen has the Sink at the left near the wall assuming this is where the pipe from upstairs comes down. Then to right of the sink is the washing machine and then next to that is the dishwasher. Both the washing machine and dishwasher are attached to one pipe that appears it could be where the leak is coming from as appears to be a vented top. I attached some pictures as its hard to explain.

My theory is that near the bottom of the pipe from upstairs is a partial blockage leading to back pressure and pulling water up towards to the waste pipe exit at the dishwasher and then overflowing. Shower and sink do not cause this issus as maybe not enough water flow?

Possible cause- We have recently had the toilet internals changed as they had broken and the landlords plumber fitted a universal flush that barely clears the bowl and we have been waiting two weeks as he is meant to be fitting a whole new toilet as agreed its not good enough so possible causing the blockage or is the toilet not going down the same pipe from bath? 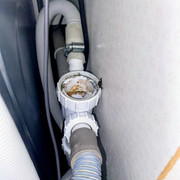 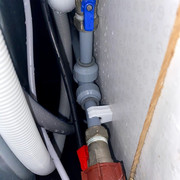 Hi bigangus
The fitting in your first picture with the two waste pipes going into it should be screwed onto a sink waste. If you have removed it to take the picture ok, otherwise it is an unworkable installation.
Regards S