Hi all - I've just had a kitchen extension build handed back to me to complete the painting & tiling, but as the plaster dries the concrete gap in between the skins at the door won't completely dry and I'm worried I've got cold bridging (although I know very little about it).

The concrete isn't really soaking, and doesn't seem to get worse when it rains, but it just wont go totally pale and ultra dry, and is definitely pretty cold. From what I can see on various threads the concrete in the cavity shouldn't be making direct contact with the outer skin; some diagrams seem to suggest there should be insulation between it, and some seem to say that as long as there's DPC between them it's fine (which there is).

Was hoping to get some other opinions on this if possible - I can't see anything in my local authorities building control docs about it (Swansea) so I'm no sure if it's a regs fail, a damp ingress issue or just an issue of that strip being a bit cold, and if that's the case how much of an issue that really is. 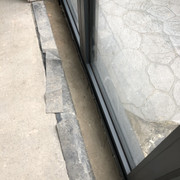 Hi dylant
Difficult to tell from your picture but it looks like the wall section the window is sitting on extends inside the room. It also looks like this has been covered with a strip of DPM. if you had BR involved for the construction you could ask them to make a visit.
Regards S