I am absolutely clueless when it comes to anything DIY so I am hoping someone will be able to point me in the right direction. I'm having some decorating done in a bedroom and the telephone socket cover is a weird yellow cover so I bought a new white one hoping to do a quick replacement but have stumbled across a few problems.

Firstly am I right in thinking that the telephone wiring has nothing to do with the electricity so I don't need to switch it off at the box?

Secondly the installation was clearly a mess because when I unscrewed the cover there was a load of debris behind it which I've managed to sweep out. I assume this is a slave/socket rather than the master because it is in the bedroom. The existing cover looks like this. 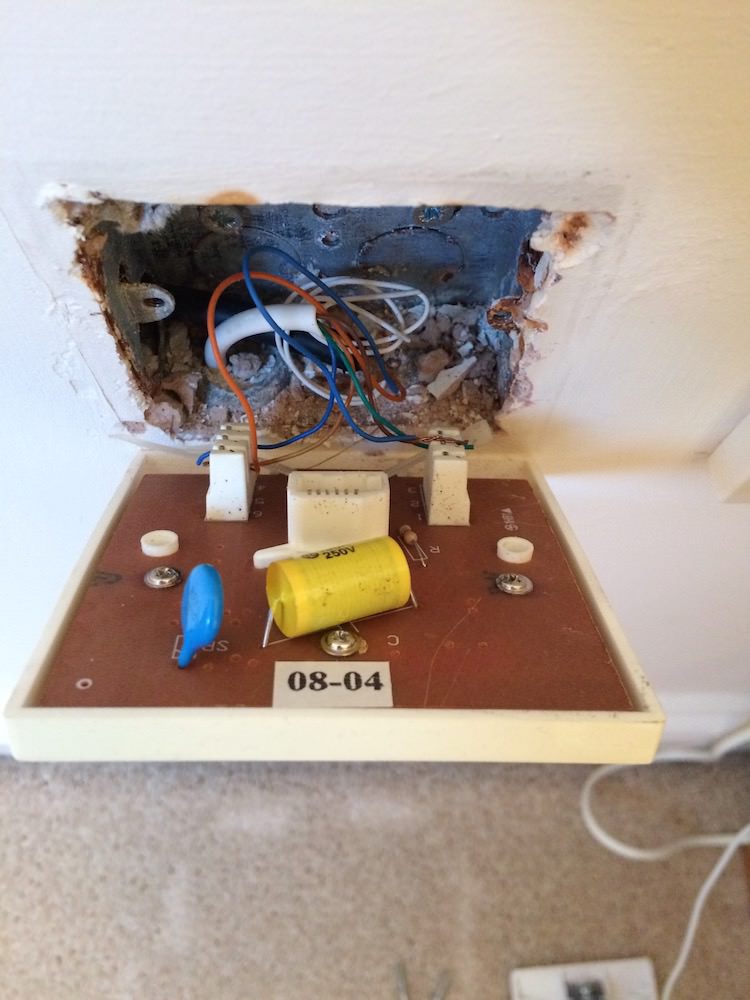 It only as four wires which from what I've read is normal. The issue that I'm having is that the wires aren't long enough to be fitted into the new cover which looks like this. 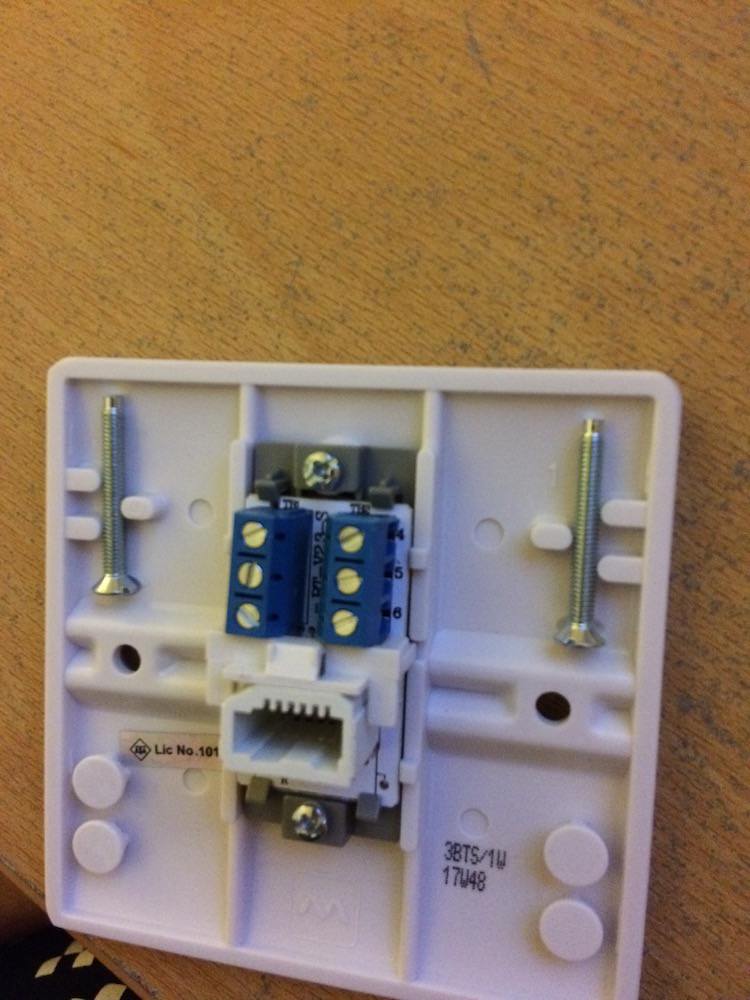 I attempted to connect the green wire to where it was supposed to go but there was just not enough room to do this and to also connect the other four wires.

I am not particularly bothered about having a telephone or my router in the bedroom but the yellow cover really bothers me. If i just swap the cover and don't connect the wires what will happen. Will I cause any damage to anything? Is there anything I need to watch out for like making sure the wire ends don't touch?

Any help will be really appreciated.

Your existing telephone socket looks like it is the master socket. The one you have purchased is a slave socket.

The master socket is also the one that makes the phone ring when some one calls you. (That's what the large yellow "thing" is for, its a capacitor)

I see it that you have three options.

You are correct with your assumption regarding switching the mains off, it would be pointless.

Thanks for the reply.

I'm surprised that this is the master socket because from what I've read this should be the socket where the BT cables enter the home. We have a phone socket under the stairs where the BT cable comes in and next to the electricity box. The socket in the photos is in the master bedroom on the second floor. Is it usual to have a master socket here. We have 4 sockets in the house - under the stairs, in the living room, bedroom on first floor, bedroom on second floor. 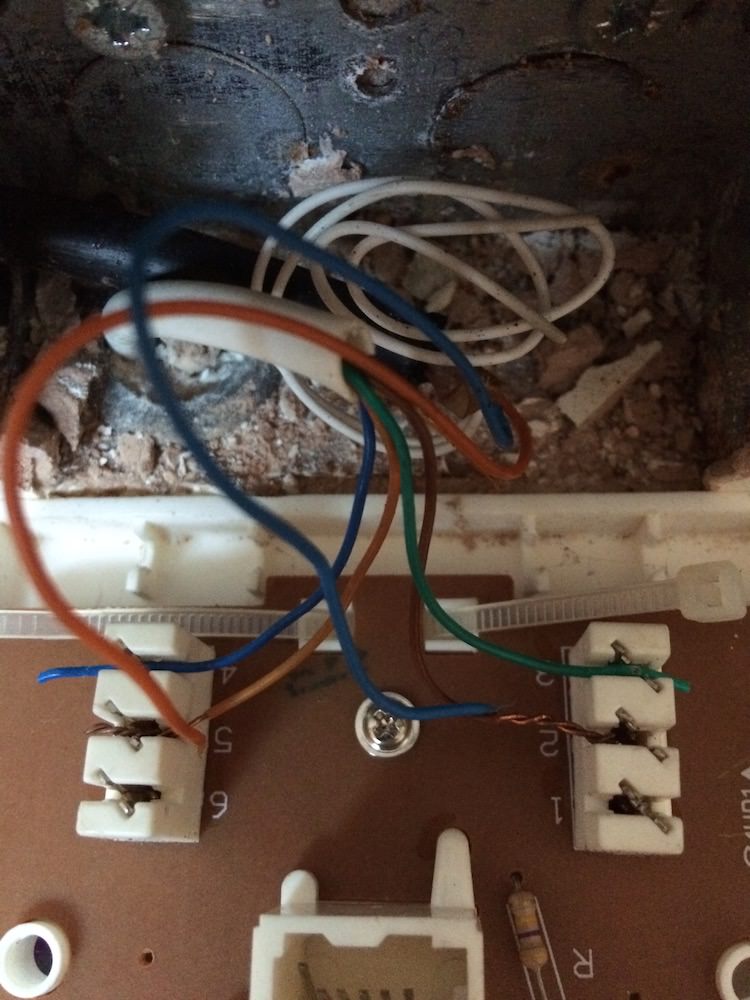 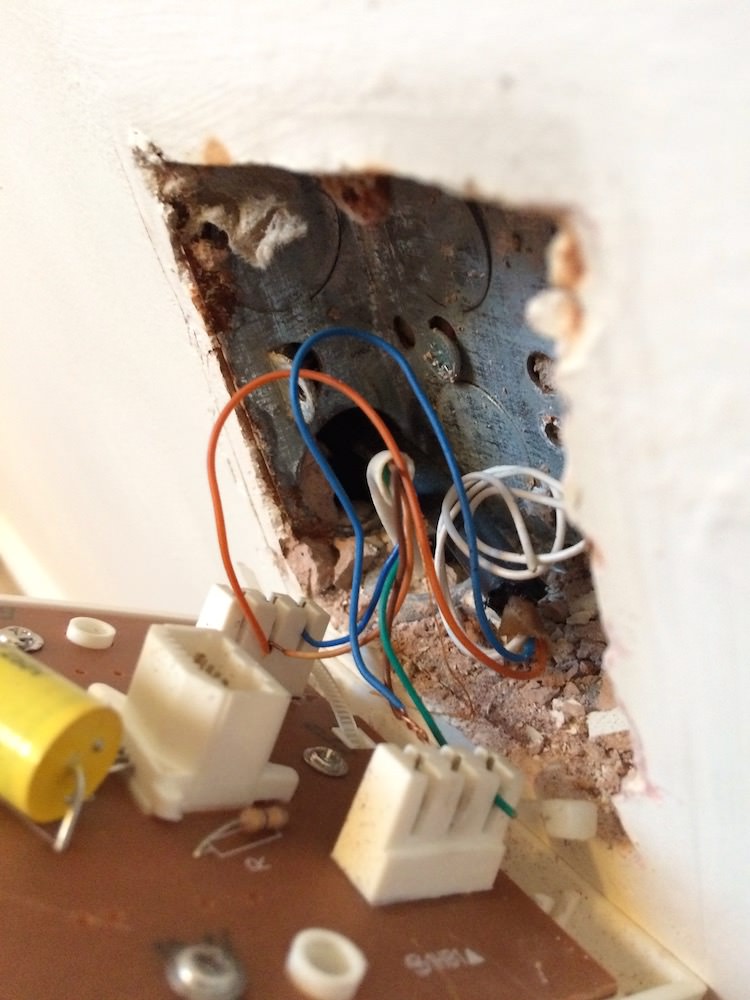 When we bought the house (as a new build) we had problems with this socket in that the phone line didn't work so they came back and did some work on it. Is it possible that they used a master socket but wired it up as a slave socket?

As I said before we don't really use the socket - we just don't like the yellow cover. Can I just put the new cover on without connecting the wires up? Is this safe or do I need to watch out for anything?

If the wires do need to be connected to a cover I think I'll get someone in - you say it doesn't have to be an electrician but I suppose that is the closest profession for what I want him to do?

ahhh, more complete information. I can only comment regarding what I see before me.

The "normal" way to connect a socket is to use orange on terminal 3, but it is down to whoever connected it. It is sometimes done where an additional master socket is used to negate a problem.

If you do not require the socket then you can tape the end of each core, and put on a new faceplate.

I think I'll tape up the end of each wire then and leave is disconnected from the face plate. Will any old tape do - masking, duct, sellotape?

I assume that this won't cause any problems with any of my other telephone sockets I have in the house.

You have a master socket there, the master socket has extra components one to make bell ring and two a spark gap to reduce damage in the case of electric storms.

Today with cordless telephones it will actually ring without having a master socket, in the old days you had 4 REN or telephone with a bell, if the telephones REN count is over 4 than adding a second master socket can some times get it to work in spite of the over load.

So to nitty gritty if you don't use telephones which use power from the 48 volt phone cables to ring bells, then simply removing the socket would work, however if you use a telephone which has no external power if that in the real master socket the bell will stop working. Phone however will still work as will any other items not using a bell, fax, modem, router etc will still work.

Since the split BT and Open reach the master socket is supplied by open reach, and their socket splits into two, you can remove the bottom half and connect internal extra sockets at that point, so if there is a fault, you can simply remove bottom half and plug in a phone direct, so easy to work out if fault internal or external.

This means you can be sure any fault is external before your supplier calls in open reach, as if fault internal they charge around £100.

brookie1402, you should use insulation tape, no other, since it is made for the job.
With your better pictures, it is now easy to see why the colours are odd, it was NOT installed by a competent person, as for will it stop any of the other sockets working, after seeing what has been done, who knows.

Thanks for the replies.

We do not use a house phone, we only really use the telephone socket for Sky and also for broadband.

When I took the face plate off a few days ago the sky box downstairs still worked.

I think I will take the face plate off, tape up the wires, and put the new face plate on and see if my router still works.

I've taken the old cover off, taped up the wires with insulation tape, and put the new cover on. Looks 100 times better and my broadband/sky are still working so that's all I care about.

Thanks for letting us know how you got on, it is appreciated.