What Plugs is Suitable for Connecting to Power Cable from Tumble Dryer?

I have a Candy tumble dryer. Yesterday I got an electrical tingle in my hand when I touched the drum inside. I don't think it was static, as I touched it several times and I was shocked several times, but after unplugging it, I was no longer shocked. I read online that this can be due to the appliance not being properly earthed. This could well be true: I purchased the dryer while living in Europe. When moving to the UK, I simply bought an adapter to cater for its 250V 16A moulded plug (a 'schuck'). I have tried to rewire to a new UK 3 pin plug (250V 3A) but the appliance is dead - what am I doing wrong? Do I need to buy a 16A fuse?
p.s. the adapter I purchased for the UK (see photo) did not have any way of connecting to the earth connection of the moulded schuck plug - so the thing was possibly not earthed at all the whole time... 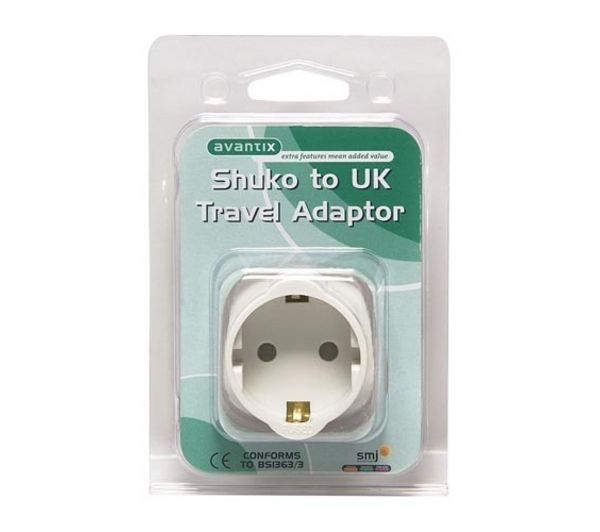 these have earth pins. But I would simply cut off the German plug and use a British one instead.

Thanks for the reply - that's what I thought too. I used a standard plug but after wiring it up and plugging in the dryer, the dryer would not come on. The euro one that I cut off was marked "250 volts / 16 Amp". The UK 3 pin was marked "250 volts" also but just a 3 Amp fuse. I replaced the 3 amp fuse with a 13 amp fuse, dryer still dead. Do I need to match the 16 Amps of the original? Hope this clarifies my question.

There should be no problem using a 13A plug with 13A fuse. If you were getting a tingle it is possible it has tripped a RCD and the socket is now dead.