If you add a Fused connection unit first (Example below) 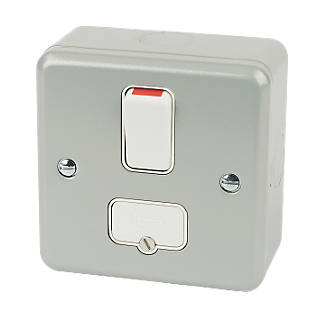 You can add as many sockets as you like.
I should also point out that if you are wanting to add something like a freezer and tumble dryer, you should have a dedicated supply installed.

It is common for a fused connection unit like Mr White shows to be fitted in the home where the cable comes out to the out building, having a twin pole isolator switch means you can switch it all off if water gets in. Inside the home often plastic rather than steel shown.

There are three things which limit the number of sockets, with an unfused spur on a 32 amp supply only permitted one device, but if that device is a FCU then it can feed as many sockets as you want as long as the prospective short circuit current is high enough to open the protective device and the permitted volt drop is not exceeded.

Clearly volts, amps and ohms are related with ohms law, so the prospective short circuit current is related to the loop impedance, as is the volt drop.

With a 13 amp fuse the loop impedance needs to be better than 2.42 ohms, 3 amp fuse 16.4 ohms, but if exceeded it means the device takes just a little longer, but still works.

However with a miniature circuit breaker there are two devices in one, a thermal trip which takes a long time to operate, and a magnetic trip which works in a fraction of a second. The magnetic bit is given a letter, B = 3 to 5 times, C = 5 to 10 times, and D = 10 to 20 times the rating of the thermal cut out.

So with a B32 MCB it needs 160 amp to trip it, or 230/160 = 1.44 add a little 5% for safety so 1.36 ohms is required to open the magnetic part, this is a problem for the DIY man as the cheap plug in testers often show if better than 1.9 ohms, so with a B20 at 2.18 ohm the plug in tester is OK, but not with the ring final with a B32 MCB. And once the figure is exceeded the time for the thermal part to work is very much longer, so unlike the fuse, the loop impedance for a MCB/RCBO is very important. Just a little too much and it does not work.

For the volt drop allowed 5% so if incoming supply 0.35 ohms then 0.94 ohm for the middle socket on the ring final which equates to 106 meters of 2.5 mm sq cable. That is line - neutral where the other is both line - earth and line - neutral which ever is the highest.

0.94 = approx 245 amp, and many loop impedance meters show line - earth in ohms and line - neutral in amps, so prospective short circuit current needs to be over 245 amps.

It seems the RCD FCU the RCD does not comply with the BS EN number required so officially you should not rely on them, however I think that is being rather pedantic.

In my home every circuit is protected with type AC curve B RCBO's which is a MCB and RCD combined, but not all homes have that, where many circuits are protected by one RCD you need to remember just a little water in out building can stop half the house working, and turning off the line is not enough, both lives, that's line and neutral need to be switched off.

So DIY wise, if using a switched FCU or RCD FCU if house not RCD protected your reasonably safe, and to be sure you can use a plug in tester with loop test which cost around £50.

To test a ring final or radial supplied with a 32 amp curve B you need a loop impedance meter, which start at around £150, so not really a DIY tool.

Personally where the RCD is an addition, not too worried, if it trips with test button then good enough for me, but if working in some one else's home clearly I must test.

The RCD has been talked about a lot lately with testing, we have types AC, A, F and B, and some testers can be set for the different types, but the 40 mS and 300 mS times are only when tested as type AC. So one asks why have the type A, F, and B settings on the tester?

Some times it all seems silly, we don't test tripping times for a MCB we trust the manufacturer, however early RCD's could fail if a strain was put on the casing when torquing up the terminals, so we always tested them, the old non electronic RCD was rather prone to sticking, the new electronic type are far better.

Oh am I glad I have retired. Getting far to complex.