Last year, I was in the process of building a new house. I started in May, and moved in with my family in November. The house is about 240m2, and has a basement of 80m2 and about 160m2 of living quarters (a living room with a kitchen and a diner) on the first floor and 4 bedrooms on the upper floor. For heating and cooling, I chose an Aermec chiller with heat pump with 16kw of heating power (model ANZ0507HA). The chiller is equipped with a Copeland scroll compressor. For backup, and during really cold days, I also have an electrical heater with capacity of 18kw, but this was rarely used (only when the temperature was really low, below -5C, the electrical heater was helping a bit, bringing the temperature back to the required 43degrees C, which I chose to be the operating temperature of the system. In those conditions, the chiller was able to heat the water to around 34-35 degrees C, before the electrical heater turned on. On the lower floor, I have 5 loops of UFH in the entry hallway, the kitchen and the diner (around 70m in length each), and one FCU in the living room, and on the upper floor, I have 4 FCU in the bedrooms, 1 medium sized radiator in the hall, and I also have 2 towelracks in the bathrooms on both floors. For the UFH, I have a 3-way mixing valve that reduced the water to 35 degrees C.

I was very pleased with the system and the way it performed last winter (my electricity bill was within the range I anticipated) and the system worked great. (during December-January, the temperature was mostly around 0 to -2C during the day, and -6 down to -14C (rarely though) during the night. However, during the month of February, the compressor suddenly broke down, and I had to switch to my backup electric heater. The installer came to see and concluded that the compressor has failed and it needs to be replaced. As the chiller was still under warranty, they replaced the compressor at no charge. During that period until the compressor was to be replaced (about a month), I realized the difference between heating the house with heat pump as opposed to an electric heater. The bill for that period (March) was about 2,5 times bigger, and I am comparing the months of January and March, which is way warmer. When I asked why did the compressor fail in such short period of time (about 4 months of operation) I was told that although they had installed over 100 such units in the last couple of years, this was the first time they had a failed compressor. I hope they're telling the truth.

During the last winter, I had the system up and running 24/7, which was not needed most of the times. For example, during the day my wife and I are at work, and our children are in kindergarten, so nobody is at home, but I had to keep the system working in order to have warm home when we return.

For that reason, I purchased the Honeywell CM927 thermostat, and I intend to use it to control the heat pump. I do have a thermostat on the FCU's, but when they reach the required room temp, the fcu shuts down, but the heat pump continues to produce hot water for the system, although I don't need it. So I am looking forward to have the following setup:

When I set the room temperature on the CM927 to lets say 22 degrees C, the FCU in the living room will work to bring that temperature (it's thermostat is not going to be used anymore, so it will be set at maximum temperature). When the temp set on the CM927 is reached, the CM927 should turn off the heat pump, and the fcu will automatically turn off when the probe senses that the water is getting cold, that's why the fcu's thermostat has no function anymore. And after that, when the temp drops 1-2 degrees, whichever the setting, the CM927 will turn on the heat pump, which will start after few minutes to deliver hot water to the FCU which will then turn on and so on.
This will be the other way around in summer, as this system also provides cooling.

And most importantly, with this thermostat, I can program the heat pump to turn on 1-2 hours before we get back from work, instead of working all the time when we're not home.

So, my question is this: How do I wire the CM927 to my heat pump? Once again, its an Aermec ANZ0507HA, of the Italian manufacturer Aermec. I will provide you with the wiring scheme I received when the installer installed the equipment and the "remote controller". This remote controllers is actually a very simple device which is wired to the heat pump directly, and provides me with very simple controls (one switch for ON/OFF and one switch for HEATING/COOLING). This is a picture of how it's wired: 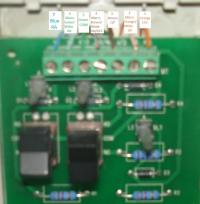 And this is the scheme I received when they installed the remote:

If I want to change some parameters (like water temperature or something else) I have to go outside and use the controller that's built in in the heat pump. This looks like this:

So can anyone advise me how to connect the CM927 in order to control the heat pump?

All answers and ideas are appreciated.

Can anyone please shed some light on this?
I will really appreciate it...
Thanks